There’s a lot more to printing pictures than I ever realized before taking a class in darkroom printing. In the world of digital photography, so many devotees espouse their ability to shoot “straight out of camera” images that require no post-processing at all, as if venturing into the territory of Photoshop is antithetical to the entire art form. I think that this kind of attitude, at least to some extent, is understandable–knowing how to use a camera in manual mode, knowing at least a little about exposure, will probably help your photos a lot more than post-processing ever can.

But I think, too, it’s a bit misguided. When you’re shooting film, photography isn’t finished just because you’ve developed your negatives. Darkroom printing is basically photography after the fact–the original scene you shot is now recorded on a negative, but you still need a lens, a light source and a photo-sensitive surface; you essentially start over, making exposures on paper instead of on film, and you have to develop the exposed paper in chemicals just like the ones used to develop film. Anyone who has attempted this even once will tell you there is no such thing as a “straight out of camera” image if you’re printing in a darkroom. Getting a good print can take hours, and many, many pieces of paper to achieve. There’s no light meter to tell you exactly how you should expose your paper to get the best result, and there are lots of techniques and tricks you can do to create an image that you’d never see in the real world. There’s not much you can do in Photoshop that can’t be done in a darkroom. (Point being, if you refuse to use Photoshop on principle alone, you’re ignoring a large part of what it means to make rather than just take a picture. Darkroom printing is “post-processing,” and I kind of think of using Photoshop as similarly “developing” images.)

That said, I’m pretty much a total beginner. I was fortunate to be able to take a class, but now I’m on my own and excited that there’s so much more to learn! Along the way, I’ll share some of my attempts here, explaining as much as I can (there are definitely a lot of gaps in my knowledge!) and what did and didn’t work for me. Below are some of the steps required to print one of the images I brought with me to my class:

Step 1: Take a stab at finding a reasonably not-terrible exposure by making a test print. A good exposure should have both a distinct black and a distinct white. 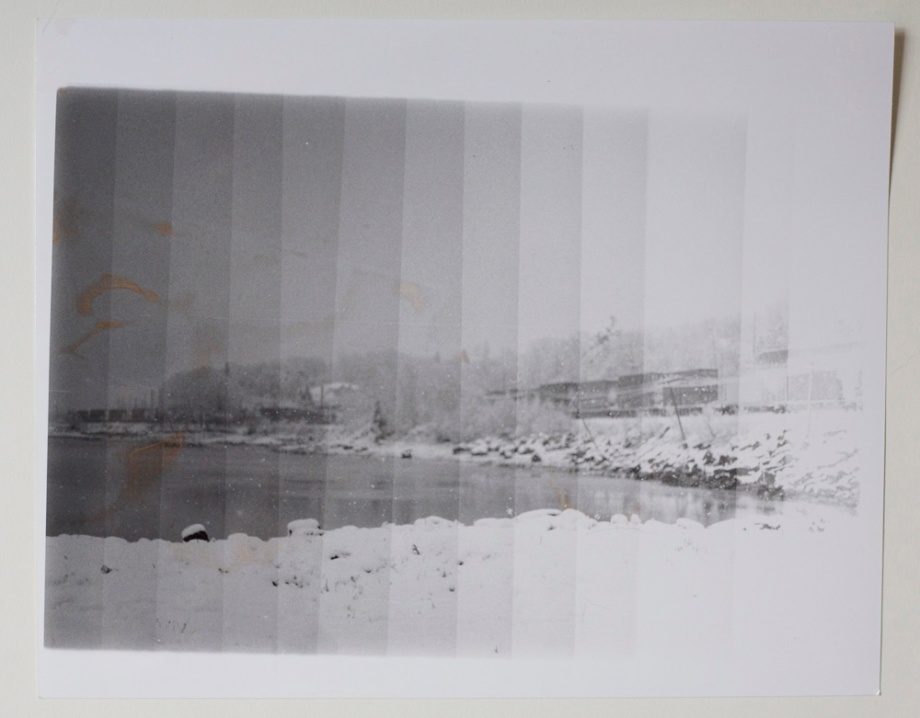 I made this by covering my paper with cardboard and exposing bands of it for 2 seconds at a time, so the lightest part shows what 2 seconds exposure looks like, and the darkest part shows 26 seconds (there are 13 bands). Unfortunately, 26 seconds wasn’t long enough in this case, because I didn’t have a distinct black area in my print.

Step 2: Try again. In order to save paper, which is expensive, I cut a piece into three strips and focused on the part of the image where I would be most likely to see a black the fastest. I also learned quickly that if you don’t write down the exposure settings on the back of the paper, unhappiness ensues.

Step 3: So, after the 3 second intervals, there are definitely some black areas in the image. The next thing is to find out where the black just starts to appear but the white hasn’t started turning too grey. Again, I tried to economize even more on paper.

Step 4: After actually way more than the two attempts shown, I found an exposure that gave a reasonable trade off between having a black, and retaining (sort of) the white of the snow. But since it’s such a small portion of the image, I tried again with a larger piece of paper to make sure nothing else had been noticeably compromised in another part of the picture.

Step 5: It looked OK to me at the time, so I went ahead and made the “final” print. Then I decided the snow was too grey for my liking, so I fiddled around with a few more pieces of paper until I got the image below: 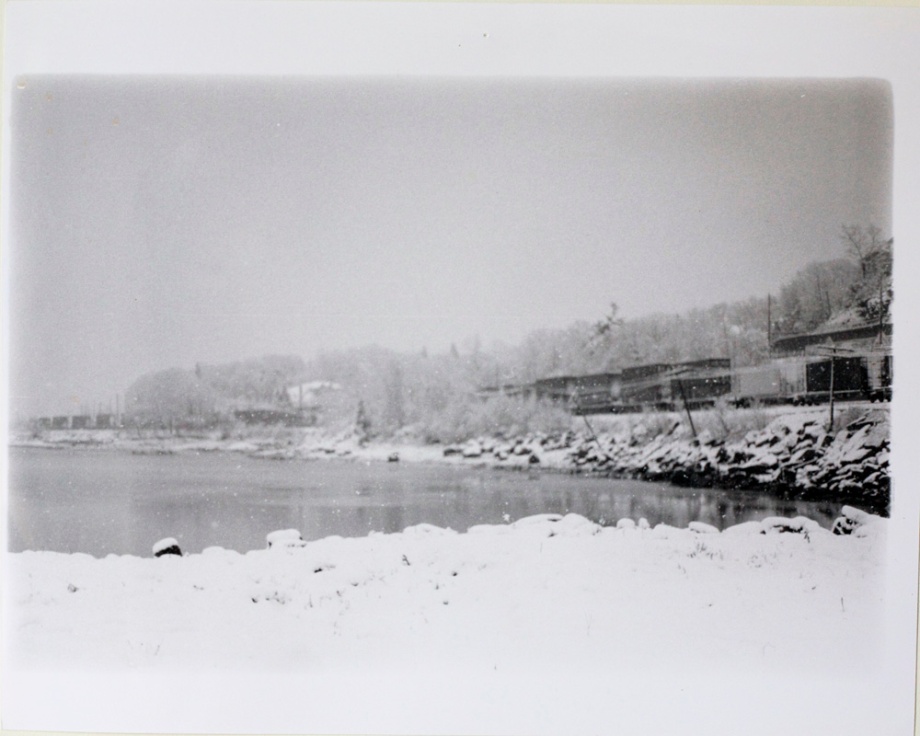 The snow is a bit whiter in this version because I simply hovered my hand over the paper for a few seconds (how many seconds exactly was determined in some embarrassing number of pieces of paper), which blocked the light coming through the negative so that the snowbank was exposed for less time than the rest of the image. The process, from start to finish, took about three hours (the entire length of the class), during which I produced this print, which I am only about 85% happy with and will likely try printing again in the future now that I know a few more elaborate tricks.

So far I’ve found that printing in the darkroom is an incredibly involved process requiring a lot of decision making in terms of exactly how you want your end product to look, and it has totally changed how I approach my digital post-processing. I’ve found myself nit-picking for hours over shades of grey, trying to figure out how to keep this part just the right shade of grey without getting that corner too dark, getting flustered over minor contrast adjustments. It forces me to think of the image as a whole, and as a million little parts, at the same time, and by the time I’ve finished printing something it’s not just any old picture, but something I created. If an area is lighter or darker than you think it should be, I can tell you why I chose to make it that way, because there’s a reason. It’s a great feeling.

For a long time now I’ve wanted to get more into street photography. I haven’t made many efforts to get more serious about it, likely due to the fact that “getting into” something is a pretty nebulous goal. I tend to be shy about pointing cameras at strangers, and am usually a lot more deliberate about my photography than the fast-paced nature of people going about their own business really allows, so I haven’t made much headway in my desire to become better at it. Recently I put a little more thought into why “street photography” was something I apparently wanted to do so badly. I want to take pictures of real people doing real things, and I want to capture moments that seem entirely forgettable until you look back and realize they were the most important. (More importantly, I want to become cognizant of those moments while they’re actually happening.) This is why I’m so annoying at family get-togethers and parties–I’m the person wandering around with a camera, trying to be inconspicuous and wrinkling my nose when someone sees me and strikes a pose. In these situations I don’t want poses, I want real. But it’s hard to get “real” when you’re walking around looking for deliberate moments. People aren’t still lifes (most of the time, at least), so I realized I’d probably have to be a little more relaxed with my camera. With that in mind, I made a more explicit attempt at “street photography,” or just “trying to make more use of my camera during non-photography-specific activities such as walking,” with my last couple of rolls of black and white film. Here are the results (courtesy of Montréal and Halifax): 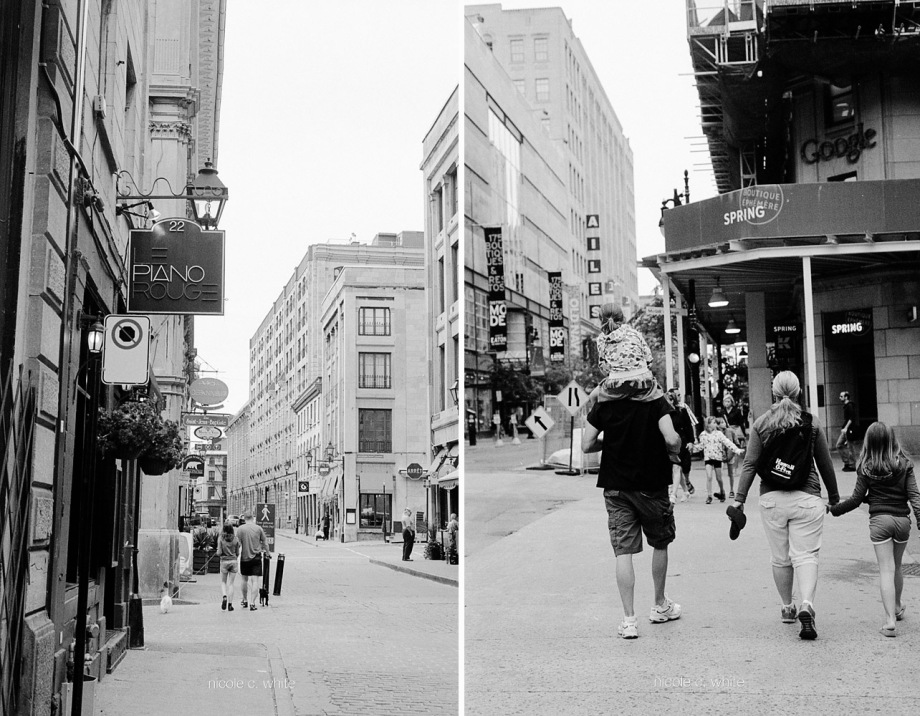 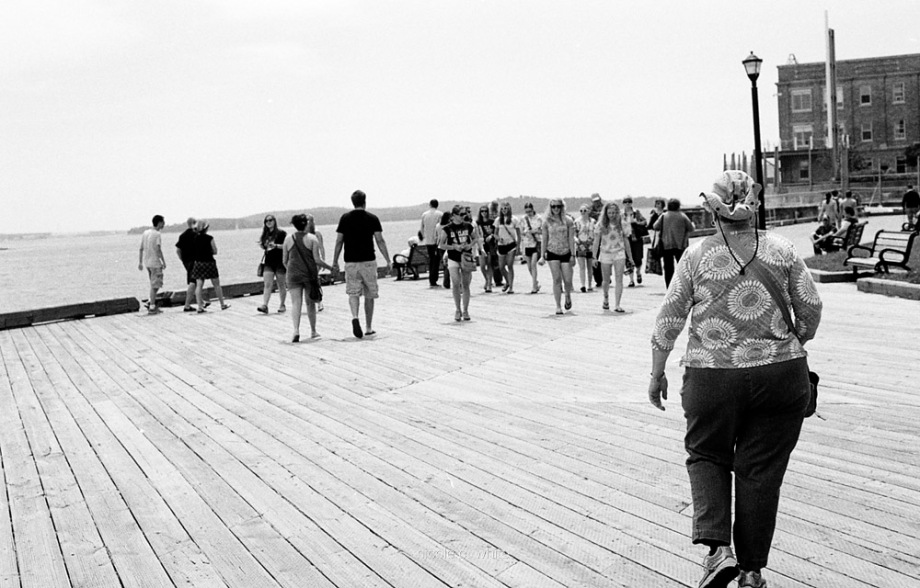 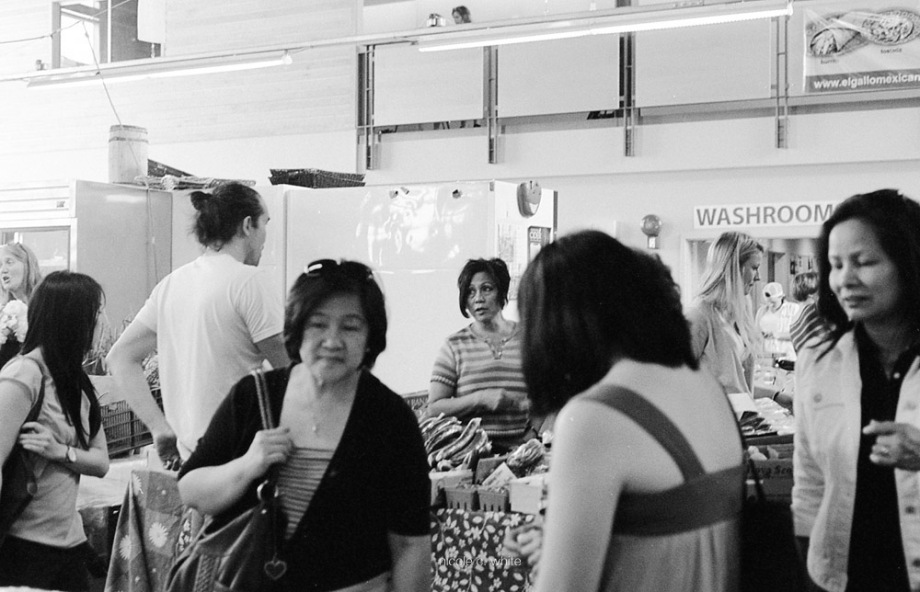 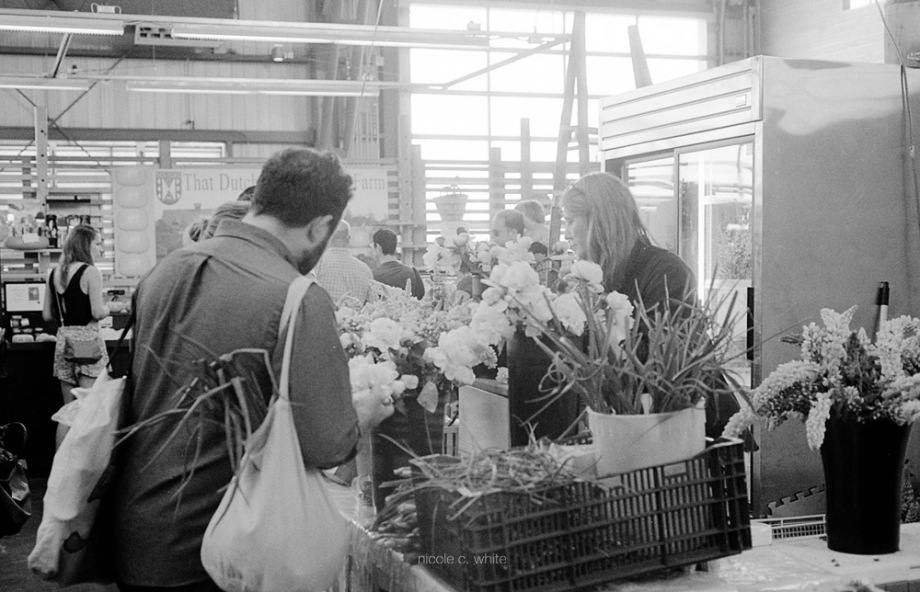 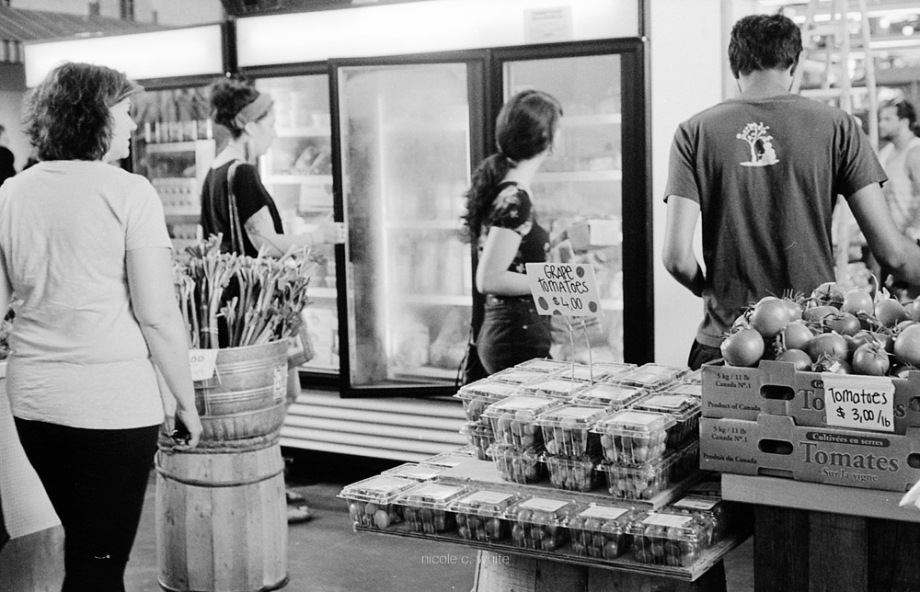 I’m pretty happy with them for a first attempt, and I discovered a few things that I’ll keep in mind for my next roll(s):

1. It’s best to pre-set the exposure for the ambient light so you can just point, focus and click when the moment strikes. If the light changes, check the exposure quickly and set it again. I’m still having flashbacks to a couple of shots I missed out on trying to change the aperture settings at the last minute! (Or just shoot in some other mode than manual.)

2. A few “warm-up” shots helps get over the initial jitters.

3. Taking pictures behind people is an easy way to get started, and way less intimidating than taking pictures of their fronts. I started with backs and graduated to side/three-quarter views. Hopefully I can continue to progress towards a certification of not being a total wimp.

Sunset over Lake Superior, just outside of Sault St. Marie 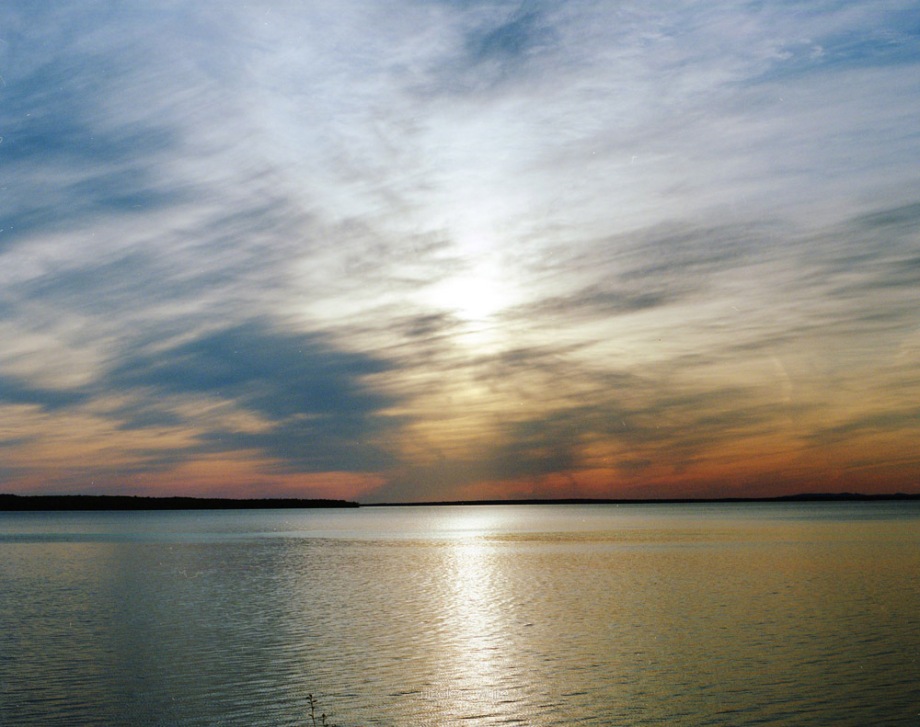 And then, in Manitoba…

We visited Gimli, a town on Lake Winnipeg

Took advantage of the landscape for evening photography 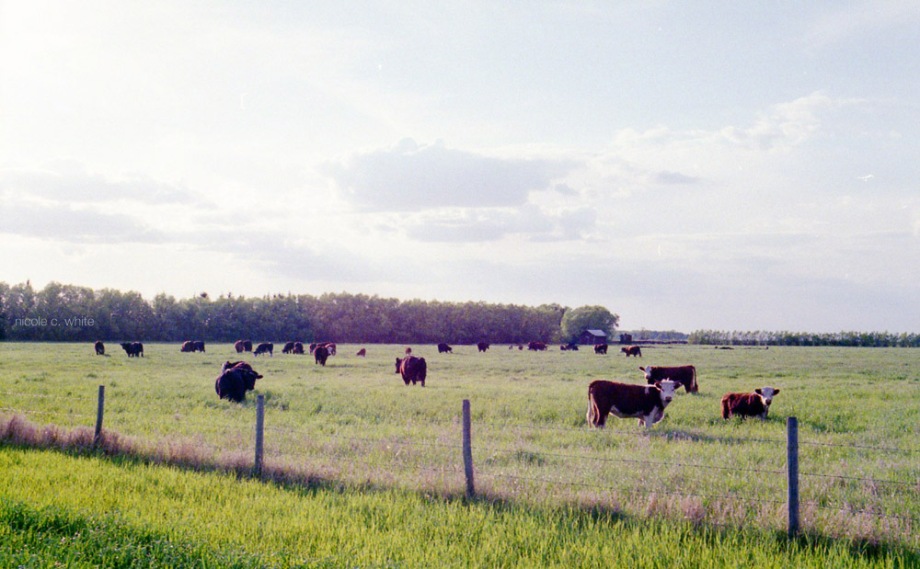 And then made the long drive home again